Aaha Kalyanam, starring Nani and Vaani Kapoor releases tomorrow. Easily the first movie to release after the state divide, one wonders if this Bollywood remake of Band Baaja Baaraat manages to create the same impact as the original.

Where Telugu audience is now very particular about expectations from small to mid budget films, actor Nani presently occupies the place somewhere between mid segment to that of high. An actor with loads of talent who had come a long way from small to big ticket projects, Nani carries a tremendous burden as to where he currently stands. After a serious drama with Krishna Vamsi’s Paisa, Nani will be seen in a very lighter metric role in this movie. 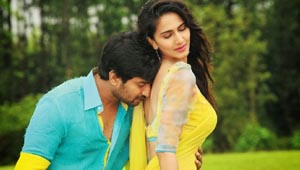 Given that the film has a predictable story, same as that of the original, what with the teaser showing few visuals lifted directly from the Hindi version, it remains to be seen if Aaha Kalyanam manages to become that commercial entertainer with engaging treatment.

Vaani Kapoor debuts with the movie, playing the very same role that was played by Anushka Sharma in Hindi. Going by the teaser again, it looks as if the girl has what it takes to catch the pulse of the audience. However, this assumption is too early to be stated as the final verdict comes out of the theaters tomorrow.

Directed by A Gokul Krishna, the movie also has actress Simran playing an interesting cameo. The music for the film had been composed by Dharan Kumar, Aaha Kalyanam is produced by the very original of Bollywood, Aditya Chopra.

So, whether the audience gears up for this one, despite being a remake – and most importantly, if Aaha Kalyanam meets the expectations and outperforms like its original version – all in a day’s work!