Dhanush’s Velai Illa Pattathaari came out yesterday, on July 18th, to a very warm reception. The houses were packed and theatre owners thrilled with the response. In fact, many eager fans had to go back disappointed from the cinema halls because they couldn’t get the tickets. 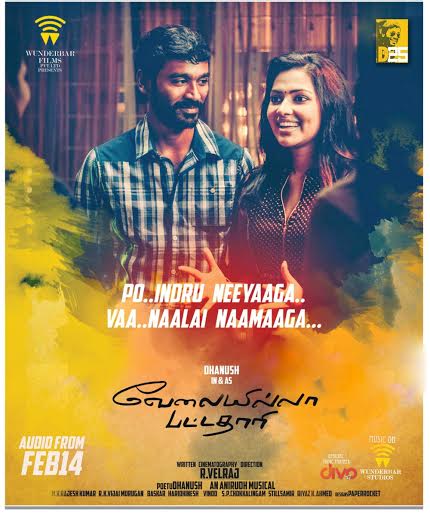 This was due to the massive pre booking of the shows, apparently.

The international screenings have also been very successful, according to sources. In Tamil Nadu alone, the movie’s collections yesterday evening after the last show was rounded up to Rs 96 lacs! That’s just short of a crore, which the flick has easily collected as of this morning.

The market analysts are on the verge of declaring the movie a smash hit!

Dhanush must be a happy man indeed today as this movie is a milestone in his career. It is his 25th film and also, he is the producer of the flick, made under the banner of his company Wunderbar Films.

The primary reason behind the success of the movie is not just the huge fan following the actor enjoys or the buzz the film generated over the last few months with some creative tactics and star power, no. The main cause for the cash being raked in by the mass entertainer is the good reviews it has been getting and the word of mouth promotion among the potential viewers.

The film has been called a perfect blend of commercial ingredients and one that would not disappoint those who go in looking for a good time. That doesn’t mean the movie is all style and no substance and you have to leave your brains at the ticket counter – VIP holds something for everyone and the narrative and vibe of the film is manifested in such a fashion that the wilful suspension of disbelief you’re required to have when watching any popcorn flick isn’t tested to a breaking point.

Anyway, congrats to Dhanush on a job well done, and keep them coming..

The movie stars Amala Paul in the female lead along with Samuthirakani, Vivek and others in supporting roles.