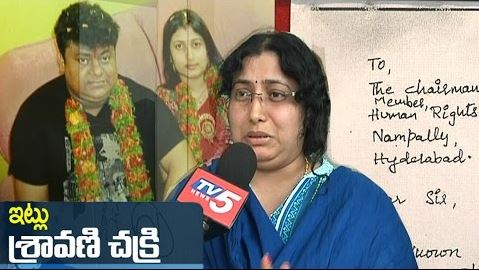 Chakri’s wife Sravani is now being questioned alot by the media. The reason for this is that the news which broke out in media that Sravani has filed a complaint on the family members of Chakri. As per the reports, Sravani is stated to have filed a complaint and sources revealed that she filed it due to the fear of getting blame on Chakri’s death.

She mentioned that she is innocent. She further revealed in a past interview that God only knows the truth. It seems that the family members of Chakri are blaming Sravani for the death of the star music director.

Suspense is clouded on this topic and we have to see how Chakri’s family members and Chakri’s wife reacts to these media reports. At present, Sravani asked media not to probe more deep into the issue and she requested media to stop questioning her till the end of final rites. Everyday, this topic is taking a new turn and today, the complaint aspect took the main slot in the headlines.