First a Model, then an Actress, and now a Singer! One of Bollywood’s most versatile actresses, Priyanka Chopra carries off all roles with elan !

Time and again she has proved her mettle with performances in movies such as Fashion and Barfi, among others. SO there’s no denying that she’s one of the finest actresses we have. One can just not play down her singing skills either, since she has impressed us all with her hit singles – ‘In My City’ featuring Will-I-Am and ‘Exotic’ featuring Mr. Worldwide Pitbull.

Priyanka Chopra’s third single release ‘I Can’t Make You Love Me’, a cover of Bonnie Raitt’s hit ’90s song, was launched in India and the US last week. It has only added to her exponentially increasing fan base.

Adding to the progress in her life, the actress recently met Pop Star Britney Spears in Las Vegas. 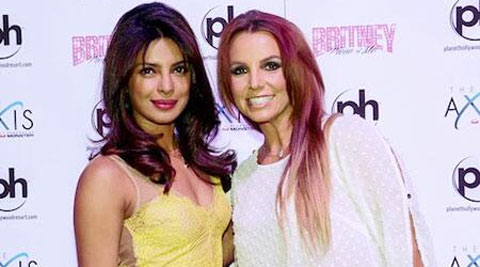 The 31-year-old Actress travelled to Vegas to host a music night at Surrender night club.

In a photo posted on Twitter, the two stars were seen posing for the camera. While Priyanka was dressed in a yellow dress, Britney shimmered in a white ensemble.

Last year Spears began her two-year residency show ‘Britney: Piece of Me’ at The AXIS at Planet Hollywood Resort & Casino in Las Vegas.

Here’s to the lady bringing in laurels to our country. Cheers!