Lijo Pellissery’s highly anticipated flick Double Barrel has been in the works for some time. Now and again, news about the movie would pop up but it kept getting either delayed or shelved due to various reasons. No more! 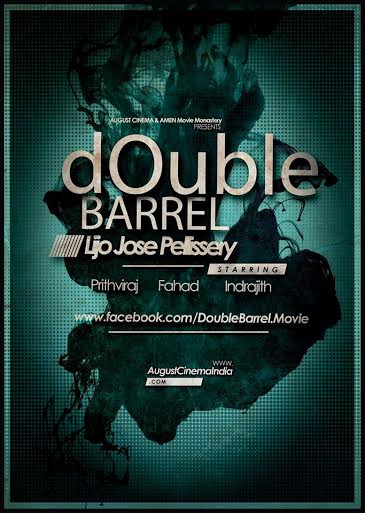 Finally, the movie has started filming in Fort Kochi as of July 25, last Friday. The comedy thriller, set against the criminal underworld, stars Prithviraj, Indrajith and Fahadh Faasil in the lead roles.

This is the first time the Prithvi and Fahadh are sharing screen space while Fahadh has already done so with Indrajith in director Lijo’s previous flick Amen.

Fahadh was also to be a part of the film Sapthamashri Thaskaraha which stars Prithvi but couldn’t do it due to is busy schedule and unavailability of dates. Curiously, it was that role which went to Asif Ali.

Double Barrel aka Eratta Kuzhal is being produced by Prithviraj’s August Cinemas in association with Lijo’s own Amen Movie Monastery.

Swathy Reddy, Isha Sherwani and Rachana Narayanankutty will tackle the female leads in this one while Asif Ali and Sunny Wayne are rumoured to be doing cameo roles.

Now, earlier reports about the movie indicated that the movie’s production budget exceeded Rs 12 crores and this is not a big surprise given Lijo’s well known ambitious visions and style, but it is indeed a humungous undertaking as far as Mollywood standards are concerned.

However, we will have to see if these reports are true and are reflected in the visuals of the movie when it comes out.

It is promised to be a light hearted but cool and stylish entertainer that will keep you glued to your seats. Indrajith, in one candid interview, referred to the flick as almost ‘pulp fictionesque’. Now that’s saying a lot and let’s see if, like Lijo’s previous venture Amen, this one too manages to live up to the expectations and the hype.